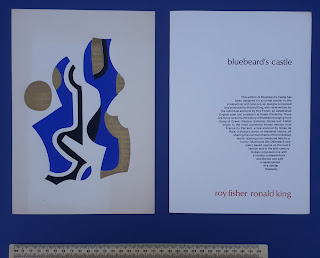 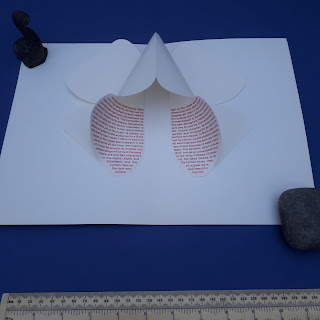 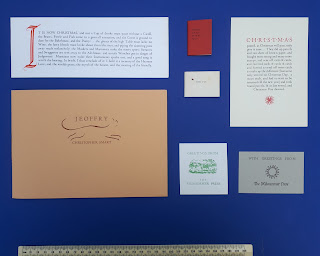 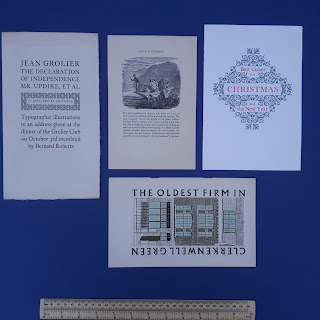 Posted by Fanfare for the makers at 10:45 No comments:

1  KIT CAT PRESS  A collection of pamphlets, broadsides and other ephemera, with some TLs and ALs from the printer, Kenneth Hardacre. Bushey, [later] Hunton Bridge, Herts. 1960-79. C. 45 pieces. A few duplicates. Various formats. £225

INTERNATIONAL SMALL PRINTERS ASSOCIATION  Ispaventure. A joint publication by members of the publishing group. 1960. Sm. 8vo. 25 leaves of contributions by different presses. Printed card covers. Plastic comb back. Hardacre’s contribution is a characteristically elegant and perceptive, brief account of the work of Will Carter and the Rampant Lions Press.

Four-page leaflets, small octavo, mostly typographical notes addressed to Publishing Group of the International Small Printers Association or (later) the British Printing Society. Nos. 1-13, mostly undated but early 1960s to late 1970s. With an accompanying short ALs: ‘Apart from my own file – this must be the only complete set in existence, for I can’t think anyone who has been in the BPS that long will have bothered to keep them.’

Undated. ? late 1970s. Quotations on the nature of books and printing, and two poems:

HESSE (Hermann)  Of the many worlds... Black and red.

ALDUS MANUTIUS  To a friend. I am hampered in my work… Black and green on light green paper.

WOOTTON (Sir Henry) The character of a happy man [poem].

A most attractive collection, put together by one individual in the mid- to late 1970s, providing something of Kenneth Hardacre's voice in correspondence and printed commentary, as well as typographic style. 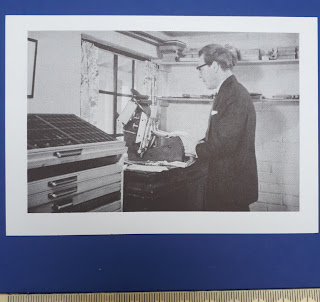 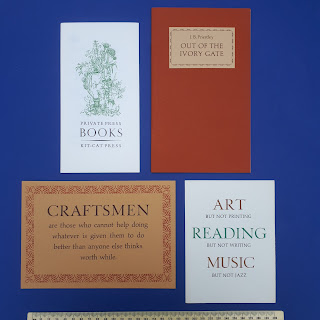 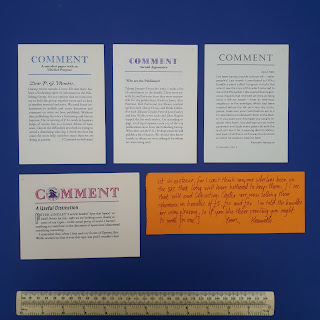 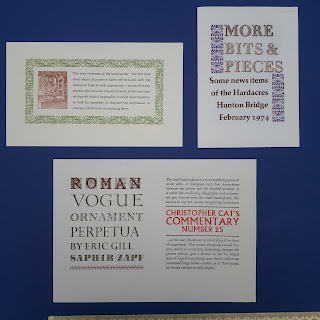 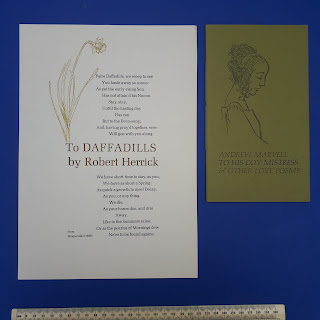 2  SHOESTRING PRESS  the tragical death of a. apple pie, who was cut in pieces, and eaten by twenty-six little villains. Whitstable, 1966. 127/225 copies signed by the artist, Ben Sands. 28 linocuts in various colours. Crown 8vo. 7 ½ x 5 1/8 ins. Pp. [28]. Concertina-style folded sheets. Some inner margin show-through from the adhesive linen tape used to join the seven sheets, each consisting of 4pp. Loose in orig. wrapper, with a copy of the prospectus, all in the orig. mailing carton. £60

‘As far back as 1743, children were learning their ABC by reciting “A. Apple Pie”. This rhyme has now been designed as a block book of 27 original lino-cut characters, who are all “humanly” engaged in the activities which the rhyme describes.’ From the Prospectus.

Ben Sands (1920-2016). His son Matt has created a website dedicated to his father’s work, www.bensandsprints.com 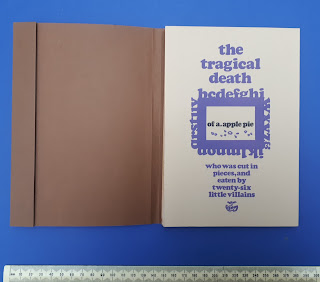 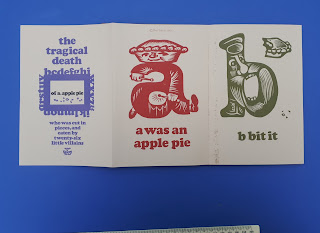 The Sycamore Press was the private press of the writer and academic John Fuller and his partner Prue Fuller and was active between 1968 and 1992. As well as publishing work by established authors such as W. H. Auden and Philip Larkin (his ‘Femmes Damnées’ is printed here for the first time), it also promoted many younger poets, including James Fenton and Craig Raine, who went on to achieve great success.

Although most of the Broadsheets were printed in quite large numbers, typically between 350 and 400 copies, the two sets in printed envelopes, put together in 1970 and 1977, were published in only a handful of copies, perhaps no more than 30 of Broadsheets 1-12, and 48 of Broadsheets 13-24. In the late 1980s six complete sets were assembled in boxes made by the Oxford binders Maltby’s. See Robert Ryan, John Fuller and the Sycamore Press, a bibliographic history, 2010, pp. 118-19. 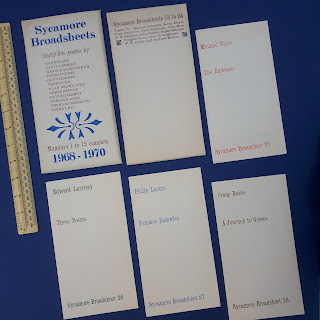 This unbroken run includes all five of the Denton Welch special numbers, together with Denton Welch: The Afterword by J. L. Chevalier who edited the material in Broadsheets 11-15, published here for the first time, from the Denton Welch holdings of the Harry Ransom Research Center, University of Texas. 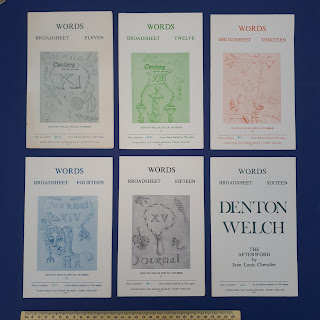 Posted by Fanfare for the makers at 06:39 No comments:

Some recent additions to stock

All books are in very good condition, unless otherwise stated. Postage is extra at cost.

‘For me, collecting Volume VII of The Fleuron from Zwemmer’s bookshop in the Charing Cross Road was as heady an aesthetic experience as my first sight of Venice. For others, too. That notable wood engraver, Reynolds Stone, told me…of a similar experience. Entering the Cambridge University Press as a trainee…he discovered that one of the printers there…Mr Nobbs, had a complete set of The Fleuron. That journal of typography changed Stone’s life, as it changed mine.’

Robert Harling, from the Foreword to Grant Shipcott, Typographical periodicals between the wars, Oxford, 1980.

Posted by Fanfare for the makers at 10:02 No comments:

Apparently the last substantial catalogue from this firm founded in the 1880s and closed in 1975. From the 1920s on it originated a number of new type designs, some of which were marketed in the Anglo-Saxon world, others only in Spain and Latin America. There is a short history in Spanish, drawing on the firm's archives, by J.R.P.Rodriguez & D.G.Moreno, 'Fundicion tipografica Richard Gans. Historia y actividad 1881-1975 (Valencia, 2004), available online as a pdf. A striking type specimen, notable for its bold use of colour and distinctive Latin quality, combining vividly modern with traditional elements. 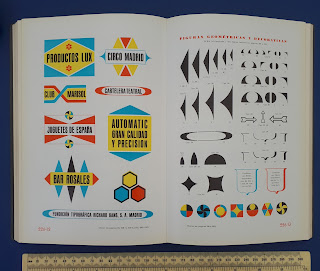 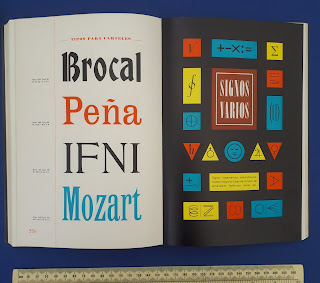 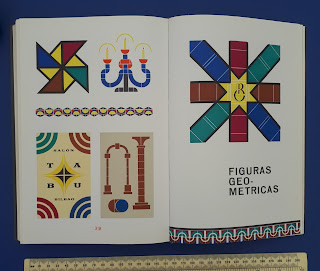 Posted by Fanfare for the makers at 02:50 No comments:

The first 'house' advertising booklet produced by the Curwen Press and one of the harbingers of the inter-war typographic revival. Herbert Simon, Song and Words,1973, pp. 138-41. 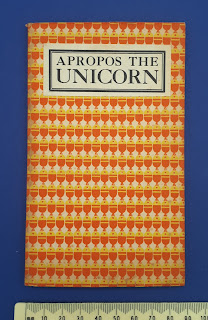 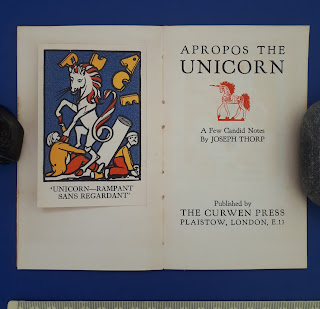 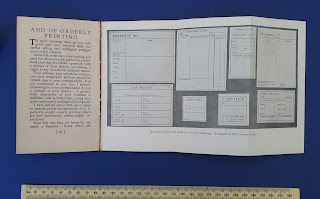 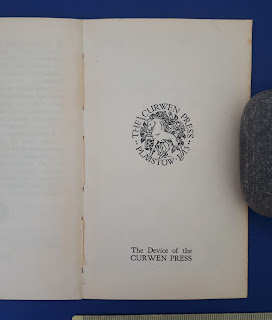 Posted by Fanfare for the makers at 04:09 No comments:

Some recent additions to stock

Albion was founded ‘to cater solely to the needs and interests of the private press printer’ (1:1). Its modest dress belied a consistently well written, lively and informative journal. Published three times a year, it consisted mainly of news, short articles on presses contemporary and historical, and reviews. Besides the editors, the three regular contributors were Kenneth Hardacre, George Szirtes and John Gohorry. An engagingly quirky view, strongly rooted in the small press poetry scene, of the private press revival in the last quarter of twentieth century.

An interesting working specimen for in-house use including 22 proprietary Curwen borders (marked CM as distinct from M – for Monotype), one ‘For Peter Davies [the publisher] only’, 6-12pt.

An unusually large collection of these type specimens which were standard references for British typographers for a generation from the mid-1950s. These appear to be the original design which was updated sometime in the late 1960s or early 1970. Almost all of the classic ‘Monotype’ book faces are here, together with a wealth of material from foundries including ATF, Amsterdam Typefounders, Bauer, Berthold, Ludwig & Mayer, Nebiolo, Stempel, Stephenson Blake, and Stevens, Shanks.

The indexes in the older volume are date-coded 1933-37 and the great majority of the specimens which have codes, 1937-40. In the later volume the specimens are dated over a much longer period, 1938-63, though the greater part of them belong to the first decade. These are very much working copies, the later specimen book, especially, adapted over time with additions and probably some deletions, as was of course intended. The two volumes were originally in the composing department of the Curwen Press. Unpacked weight 6.2kg.

A magnificent specimen-album, with examples of the complete range of sizes, of Tschichold’s Sabon roman, incorporating first English translations of his 1967 essay for Stempel, Leben und Bedeutung: des Schriftschneiders Jakob Sabon and Jost Hochuli’s review of the type first published in Typografische Monatsblatter (1969), together with short texts by John Dreyfus, Ruari McLean, Jean Francois Porchez and others.

Posted by Fanfare for the makers at 06:41 No comments:

A collection of printing from woodblocks on a diversity of papers

WILLIAMS (Graham) A collection of printing from woodblocks on a diversity of papers. Charing: The Florin Press, 2021.

Each collection comes with a copy of Graham Williams’s book Understanding paper: assessment and permanence for artists & fine printers, 8vo, pp. 134, cloth, d.w., in which thirty-four of the (mostly hand- or mould-made, with a few machine-made) papers are independently assessed as to colour, pH value, strength, furnish (what the paper’s made of, including fibre content and any chemical additives) and printability. The book also includes notes on ink formulation and a glossary of paper terminology.

Several years in the making, A collection of printing from woodblocks is informed by a lifetime’s engagement with fine paper and the printing of woodblocks by hand. Photographs cannot do justice to these images. This is three-dimensional letterpress at its most complex and beguiling – and private press work of the best kind: exemplary, exploratory, instructive.

I can offer special or standard copies as follows:

*This is slightly more than the publisher’s price as I’ve chosen to upgrade the accompanying copy of Understanding paper provided with standard copies from paperback to cloth.

A full prospectus is available online at www.florinpress.com 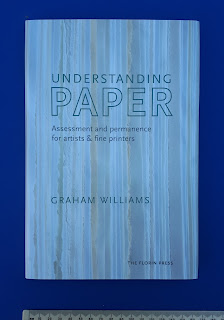 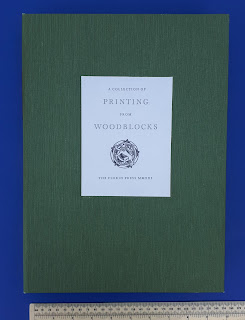 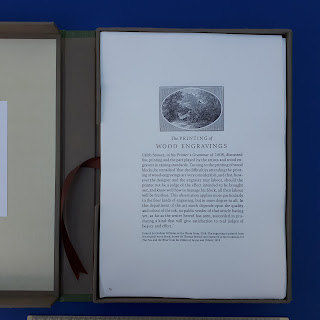 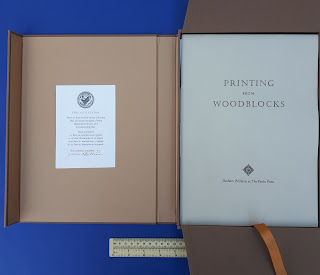 Posted by Fanfare for the makers at 08:59 No comments:

Fanfare for the makers
Enquiries to: fanfareforthemakers@gmail.com Thank you.